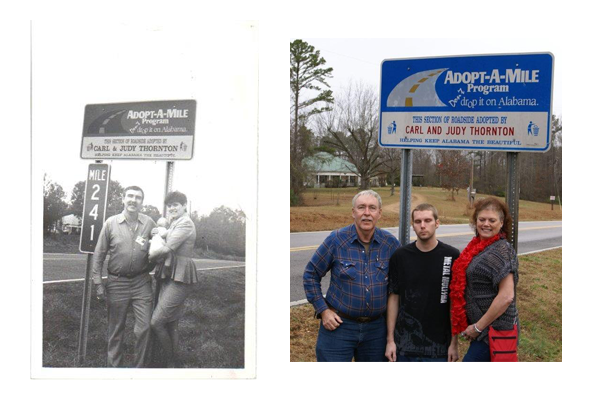 In 1990, Carl Thornton began working with the Adopt-a-Mile program in Lamar County, Alabama with an ambitious goal to have 100% of the state and county highways in the county adopted through the Adopt-a-Mile program.  He personally demonstrated his committement to a litter-free Alabama by adopting  mile 217 of Highway 17 just south of Vernon, Alabama.  He, with the help of his wife Judy and son, Carl II, have tirelessly maintained that stretch of Alabama highway for 27 years.

Carl, Judy, and Carl II were featured in the Lamar County Newspaper, The Lamar Democrat,  story highlighting Lamar County's achievement of being the first Alabama county to have 100% of the state highways in the county adopted through the Adopt-a-Mile program. (Wed. Nov 21, 1990)

Alabama People Against a Littered State

Alabama PALS is a 501 C-3 Not for Profit statewide organization dedicated to providing and implementing anti-litter programs for all Alabama counties, cities, communities, schools and other groups striving to enhance their environmental and economic impact through a litter free, cleaner and more beautiful environment.

© 2016 Alabama People Against a Littered State. All Rights Reserved
Designed and hosted by i5 Technology, LLC